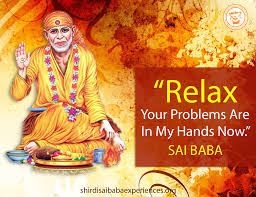 It would be befitting to humbly seek his Blessings, performing a mental Arati ;
Before venturing to write a few lines on the saintly Avatar Sri Sai of Shirdi.
In 1858, having arrived along with a wedding procession in the village of Shirdi ,
He gracefully accepted the name Sai as bestowed on him and settled under a neem tree.

Later, shifting to a Masjid which he fondly named as Dwarakamai,
He enthralled the blessed folks in and around, this exalted Saint Sai .
About his miraculous powers there are instances galore-
-His devotees know them as true and not mere folklore.

A God of the commoners, he was an embodiment of humility;
He set an example for all as to how to live happily in simplicity.
Sri Sai loved to cook himself and distribute food in plenty;
No one came to his door and left with a stomach empty .

Playing with children to their heart’s wishes,
Sai and his devotees sang and danced like dervishes.
Full of love and compassion for suffering humanity,
Shirdi baba used to himself tend to the sick and needy.

Begging for food like a true fakir seeking alms,
He shared what he got, returning with empty palms.


Though Sai baba attained Samadhi in 1918, leaving all in sorrow,as promised , Sai Bhagwan is always with us, whether today or tomorrow.