THE SIMPLE YET POWERFUL BALAJI TEMPLE 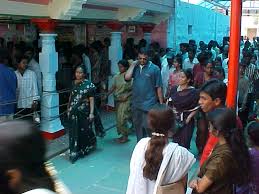 Balaji is another name for Lord Vishnu, who is one of the three main Hindu deities.

There is an internationally famous Balaji hill temple at Tirupati in Andhra Pradesh in South India. This temple has lakhs of devotees thronging for a Darshan (Sighting) of the Lord Balaji deity all year around. Devotees sometimes have to wait several hours for a quick Darshan of the Lord. The crowds get even larger on festival and other auspicious days.

There are several other Balaji temples across India of course, especially in the South of India.

But there is one, relatively less known Balaji temple on the outskirts of Hyderabad in Telangana, India, which is quite special indeed.

This is called the Chilukuru Balaji temple because it is located in a small village called Chilukuru, about 30 kms from Hyderabad.

What then is special about this temple?

Firstly, this unassumingly small temple is among the very few probably which doesn’t have a money donation hundi. In fact, during my visit to the temple, I have even heard announcements requesting devotees not to make any cash donations. Rather, they were encouraged to buy-only if they wished to help out-some very low cost religious publications from the temple.

Another specialty is its interesting history. There was a Balaji devotee from Chilukuru who used to visit the hill temple at Tirupati every year without fail. When he became old, he could no longer undertake the arduous pilgrimage to Tirupati and was very sad about this.

It is said that Lord Balaji Himself appeared to his beloved devotee and assured him that then on, He would come to the devotee’s place Himself to enable his ardent devotee to continue his worship of Balaji. Thus a small idol of the Lord was discovered in the devotee’s place and was installed as the presiding deity in Chilukuru temple.

Though small, the temple attracts quite a sizable crowd every day in proportion to its size. Most go there hoping for some wish to be granted by Lord Balaji. There is an unwritten system followed by many for this. They make eleven Pradakshins (Circumambulations) of the Lord when making a wish.

Later, when the wish is granted, they are supposed to return and make hundred and eight Pradakshins as a token of thanksgiving. The demand for this vow is so high and the temple so small that some days it is quite difficult in the jostling crowd to make the Pradakshins. Still it goes on with Spiritual ardour due to the glory of Balaji.

Quite a few years back, I had the good fortune of being able to offer this thanksgiving to Chilukuru Balaji.

Have you been there, dear friend? If so, kindly share your experiences.
WONDERS IN THE WORLD