Showing posts from March, 2017
Show All

THE SIMPLE YET POWERFUL BALAJI TEMPLE Balaji is another name for Lord Vishnu, who is one of the three main Hindu deities . There is an internationally famous Balaji hill temple at Tirupati in Andhra Pradesh in South India. This temple has lakhs of devotees thronging for a Darshan (Sighting) of the Lord Balaji deity all year around. Devotees sometimes have to wait several hours for a quick Darshan of the Lord. The crowds get even larger on festival and other auspicious days. There are several other Balaji temples across India of course, especially in the South of India. But there is one, relatively less known Balaji temple on the outskirts of Hyderabad in Telangana, India, which is quite special indeed. This is called the Chilukuru Balaji temple because it is located in a small village called Chilukuru, about 30 kms from Hyderabad. What then is special about this temple? Firstly, this unassumingly small temple is among the very few probably wh
Post a comment
Read more

OFFERING TO GOD THROUGH THULABARAM 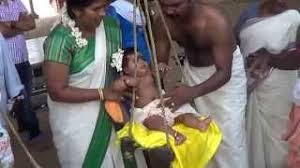 A large common balance is kept in many Indian temples, notably in the famous Guruvayoor Krishna temple in Kerala, among others. Thulabaram is a Hindu religious practice wherein a believer makes a sacred vow to make offerings to the Lord by weighment in the large set of scales kept for the purpose. The offerings can be any single thing which the devotee wants to make, ranging from rice, sugar, fruits, vegetables, silver or currency coins… as he or she pleases. Generally, such offerings are promised to the Lord while praying for some boon-for instance-recovery of an ailing child. In this case, the parents might undertake to give sugar, specified fruits or vegetables equal to the child’s weight as measured on the Thulabaram. It is a matter of faith, like many other such vows across the world religions. But I, as a firm believer had the benediction to see and experience firsthand the miracle of Lord Krishna in Guruvayoor. It was back in the late 1990
Post a comment
Read more

- March 12, 2017
Image wikipedia He was a great Shiva devotee, this simple Brahmin called Vaadavurar, Admired by Pandian king for his brilliance, he became his prime minister. When charged with the task of procuring horses for the king at Madurai,  He proceeded thereupon with plenty of Royal Gold to a village Tiruperundurai. There at a temple, the minister did in great joy meet a learned Siddha, And forgot everything realizing in bliss that it was indeed his Iswara. Lord Shiva was indeed there to bless his devotee with Jnana Upadesa, After conferring Divine Knowledge, he addressed him as Manikyavachaka. Thereafter Manikyavachaka forgot the horses , forgot the king’s instruction, Fully immersed as he was in the temple and Iswara’s benediction. When all the Gold was for the temple spent, he realized he had empty purses He then prayed to the Lord Shiva not knowing how to deliver the horses. Though delivering miracl
Post a comment
Read more 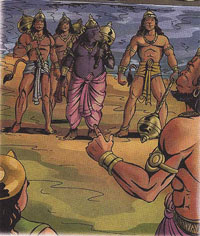 Mightiest Among warriors, wisest among counselors- all in one, Was the great Bear king, the powerful but sagely Jambavan. Created by God to help his Earthly Avatar, Lord Sri Rama, He made service of the King Rama as his life’s Dharma. Much is written about the might of the valiant Jambavan, His most valuable role was the inspiration of Hanuman, Encouraging him to dare and cross the ocean- a feat most remarkable, By reminding Hanuman how mighty he really was- and capable. When Lord Rama’s brother Laxman lay critically injured by Indrajit, It was Jambavan again who refused to concede slightest defeat, Advising Hanuman to bring from the Himalayas a wonder herb-very rare, He ensured the recovery of Sri Laxman- this wondrous bear.   Jambavan and Hanuman, devotees of caliber very rare  Were said to be the only ones blessed to there  During both Rama and Krishna Avatar.
Post a comment
Read more
More posts