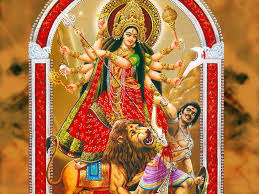 She is dazzlingly beautiful and infinitely gracious in her benevolent aspect,
She is all powerful and blood curdlingly frightening in her terrifying aspect,
She is Shakti, the Mother of the Universe, the luminous embodiment of pure energy,
She is Simhavahini- astride a lion- and the destroyer of evil, the savior of the virtuous.

Durga was created by the trinity of Gods with their concentrated power and energy,

When the whole Earth and even the Heavens were shaking with fear and in jeopardy;
Ever since the menacing and terrifying Mahishasur, the buffalo demon,
Bagged a boon from Lord Shiva that he could be killed by no man.


Thus ,created by the Gods themselves with a mission to destroy the powerful Mahishasur,
Durga is concentrated pure and Infinite Energy in woman form, built to annihilate evil.
Equipped by the Gods with spears, trident, conch, mace, sword and many a weapon,
Durga fought a terrible battle with the asur and destroyed him, this Goddess among women.

Finally the humans on Earth and the Gods in heaven danced in joy and glee;
So Durga is venerated and worshipped every year during nine days of Navrathri.
As the protector of the virtuous and benevolent savior of the needy,
She is known to her devotees as the great Mahishasur Mardini.
STORY RHYMES