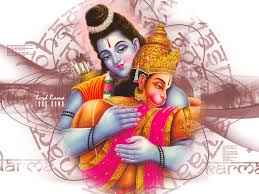 He is the last word in strength and courage, for he is the immortal Bajrang Bali Hanuman,
With arms strong as Indra’s vajra- Vajr-ang or Bajrang is unmatched in strength by any man.
Born to mother Anjana- a monkey Apsara and the wind God,Vayu Bhagwan - he can also fly.

Once, Hanuman, mistaking the Sun for a fruit, even attempted to grab him in the sky!

Life changed forever for Hanuman when he met Sri Rama,searching for wife Sita in the forest;
Instant devotion to the noble Rama and his brother Laxmana impelled Hanuman to join in their quest;
Motivated by devotion and encouraged by the powerful Jamabavan, he made a giant leap,
A towering giant leap, right across the ocean, in his search, that made even the Gods in joy weep.

Flying now across the ocean, Lanka was now Hanuman’s destination to locate gentle Sita;
On the way, he had to, in deference to her boon, enter and exit the mouth of a sea demoness by name Sursa .
To fulfill the boon, the clever Hanuman kept growing in size, making her also do likewise,
Then suddenly he, by suddenly shrinking in size, entered through her ear and exited her mouth.

Pursuing his relentless search, Hanuman, in great joy found Sitadevi under an Asoka tree,
Showing her SriRama’s signet ring, he announced the Lord would soon make her free.
In the Ashokavan, Hanuman later went on a fierce garden wrecking spree,
Easily defeating those who fought him thinking he was just a monkey.

But when he was bound with Brahmastra by Indrajeet,  the powerful son of Ravana,
The wise Hanuman went quietly to the Palace, to deliver a message to the king of Lanka.
When he advised Ravana to return Sita or face his nemesis, Ravana in great ire
Asked his soldiers to set the audacious Hanuman’s tail on fire.

Hanuman,who till then was sitting majestically on his coiled up tail, towering above Ravana,
Used his great powers to calmly escape by shrinking his body and then set fire to Lanka.
Then, after dousing his tail flames, he flew back triumphantly to his beloved Rama,
Announcing to Rama’s and Laxmana’s great joy the news about finding in safety Sita.

We know that in the great war that followed this discovery of Devi Sita,
Sugriva’s monkey army and Hanuman rallied behind Rama to defeat Ravana.
Many are the tales of the Bajrang Bali’s valour, which of course we know well
But let us talk about his one great deed during the war, for which there is no equal.

When Laxmana,wounded by Indrajeet,son of Ravana, was lying unconscious,
A herb named Sanjeevini was required to save Laxmana’s life, so precious.
Hanuman, unable to locate the herb in the mountains of  the Himalaya,
Brought the entire mountain to enable Sushena to get the herb and save Laxmana.