PIYADASI -BELOVED OF THE GODS. 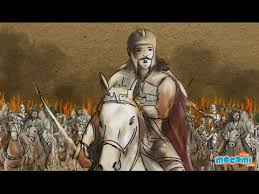 He was a King like many others in human history,
Born to swim to glory in rivers of blood, guts and gore;
Programmed to carve an empire out of human misery,
And to sculpt his name for posterity out of human skulls.

But, for the third king of the Mauryas, it was not destined to be so.

For:
The Kalinga genocide in 262 B.C made Ashoka see the river of red;
And realize with horror, sorrow and remorse,
The grave folly, the wastage and the terrible human suffering;
The million agonies caused by this mindless slaughter of war;
And the empty victory on the corpse-ridden battlefield.

And then, through the heart rending anguish,
The Light of Wisdom dawned on him;
And then was born in him the True Emperor,
A King-of-Hearts, a Creature of Compassion,
The maker of Edicts, the pillar of Buddhism,
‘Piyadasi’, the Beloved-of –the- Gods.