Showing posts from April, 2020
Show All

ENJOY THE BLISS OF MEDITATION.

ANECDOTES FROM THE LIFE OF SWAMI VIVEKANANDA-1

- April 18, 2020
I do hope and believe that the great Indian monk, Swami Vivekananda requires no introduction as he, in his very short life of 39 years became famous, not merely in India but in the whole world.

The objective of this post is to highlight some of the interesting events from his brilliant and illustrious life. There are so many anecdotes and events indeed which would show the brilliance and strength of character of this ‘YugaPurush’, the great disciple of Swami Ramakrishna.

Here are just a few interesting anecdotes from the Swami’s life.

* Narendra (Real name of Swami Vivekananda) had a reputation as a master story-teller even in childhood.When he spoke, people tended to listen in rapt attention, due to the charm of his words. One day in school, Narendra was seen talking with his friends who were oblivious of the fact that the teacher had started the class! Angry over the lack of attention, the teacher demanded to know from the students as to what he had been teaching. He was amazed wh…
Post a comment
Read more

Manikyavachakar, so called because his words (Vachakam) were like precious gems, was a Tamil poet-saint who lived in the Southern Indian city called Madurai in the ninth century.

He is best known for his book of Shiva hymns called ‘Thiruvasakam’ which is a book dedicated to his God, Lord Shiva. Thiruvasakam forms volume eight of a great Saivite (meaning pertaining to Lord Shiva) text collection called ‘Tirumurai’

He was born in a temple priest family at a place called Vadhavoor very near to Madurai which was ruled by the Pandya Kings. From childhood, he was known for his scholarliness in imbibing all the religious texts of the time. He was also known for his compassion and above all, for his devotion to Lord Shiva. Unknown at that time to many, he was a restless seeker of his Guru and God, Lord Shiva.

Soon enough, his reputation reached the ears of the then Pandya King who lived in Madurai. Impressed by the young Brahmin’s wisdom at such a young age, …
Post a comment
Read more

SANDWICHED BETWEEN THE LAYERS OF

THE CONSCIOUS AND SUBCONSCIOUS MINDS ,

WITH A GENEROUS SPREAD OF THE BUTTER OF OUR EDUCATED PREJUDICES.

NO WONDER THEREFORE THAT OFTEN WE SUFFER FROM INDIGESTION OF THE MIND. 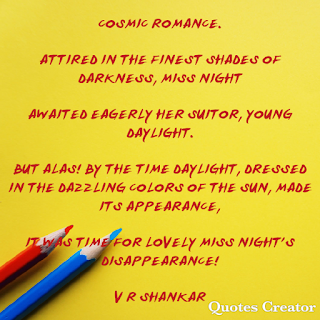 A HUMOUROUS ANECDOTE FROM THE GREAT MAHABHARATA

- April 06, 2020
Time for peace between the Pandavas and Kauravas was running out and the war fever was thick in the air.

Though opinion was split on this, it was anyway decided that Lord Krishna, the great friend of the Pandavas should make a last ditch attempt at peace. The wily Krishna, knowing full well the negative outcome of this ( Isn’t He the outcome Creator!) however agreed to go to Hastinapur to convince the arrogant Duryodhana, the eldest of the Kauravas, to try and avert a bloody war.

When news reached Hastinapur about Krishna’s impending visit, there were a lot of hot discussions in the courtroom. The King, Duryodhana’s father, the Pithamaha ( Bhishmacharya),the minister Vidhura and quite a few other wise men were all for peace , but the adamant Duryodhana would have none of it. He was also ill-advised by another so-called well wisher… His uncle Saguni.

Duryodhana with his equally deceitful Dusshasana even made plans to trap and imprison Lord Krishna!

WHY GITA TEACHINGS ARE IMPORTANT 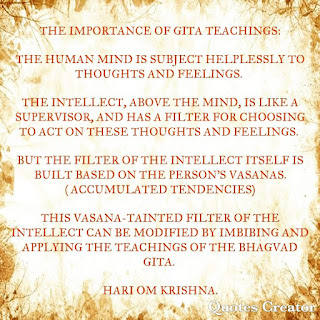 As we know, Dasaratha, the King of Ayodhya was shell-shocked on hearing his beloved wife, Kaikeyi’s demands. He never could have dreamt that she would misuse the boons granted by him in such a horrible manner.

He pleaded with her to withdraw the two demands… To make Bharata the heir to Ayodhya’s throne, and worse, to banish Sri Rama to the forest for fourteen long years.

When she refused to reconsider, the hapless king agreed reluctantly to Bharata’s ascension but begged of her not to ask Rama to be exiled. But Kaikeyi, her sense of good and bad blurred by her blind love for her son, refused haughtily. She further taunted him saying that the great descendants of the Raghuvamsam( Raghu or Sun Dynasty) were supposed to have a high degree of integrity and keep their word at any cost.

Finally, it so transpired that Sri Rama himself, coming to know about these developments, was f…
Post a comment
Read more
More posts